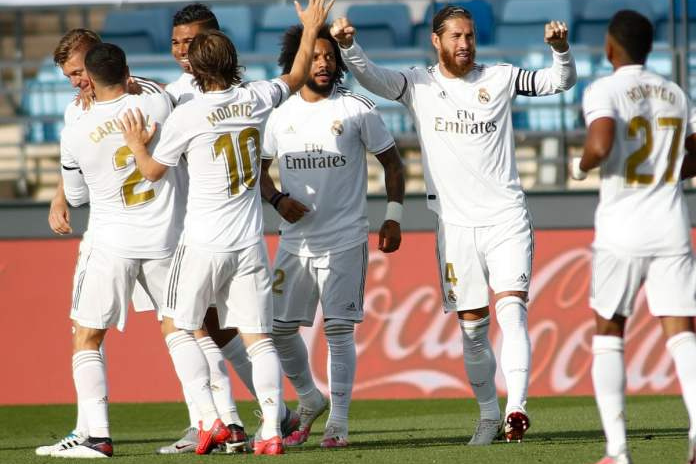 Toni Kroos got Real off to an ideal start at the empty stadium based at their training ground by scoring in the fourth minute while captain Sergio Ramos struck on the half-hour mark before Marcelo netted in the 37th.

Real did ease off after the interval and Eibar forward Sergi Enrich struck the woodwork before Pedro Bigas pulled a goal back for the visiting side on the hour mark.

Real Coach Zinedine Zidane used all five of his substitutions as his players continued to tire.

The win kept Real on La Liga leaders Barcelona’s heels with 59 points after 28 games. They are two points behind Barca after the Catalans beat Real Mallorca 4-0 on Saturday.

With Real’s Santiago Bernabeu stadium being revamped, Zidane’s men re-started the campaign at the 6,000-capacity Di Stefano stadium where their reserve side play.

Real are usually greeted by a throng of supporters when their bus arrives at the Bernabeu but they faced a far more relaxing journey on Sunday as they walked 300 metres from their residency at the training ground to the stadium.

Germany midfielder Kroos put his side at ease with a powerful first-time shot which fizzed into the far top corner while Ramos struck the second by knocking a pass from Eden Hazard into the net to complete a sweeping counter attack.

Brazilian left back Marcelo then further stretched the scoreline with a lethal finish into the bottom corner and appeared to celebrate with a tribute to the Black Lives Matter campaign taking place around the world.

Real eased off after the interval and Eibar forward Sergi Enrich struck the woodwork, before Pedro Bigas pulled a goal back for the visiting side on the hour mark. The result finished 3-1 to Read Madrid.

Real coach Zinedine Zidane used all five of his substitutions as his players continued to tire.

“We are very happy with the three points and that things are starting to get back to normal,” said Ramos.

“It was a bit weird for everyone to return after such an awful crisis. It’s been a strange situation, but at last we’re back. Football is very important to everyone and to be able to step on the grass again gave us immense joy.”