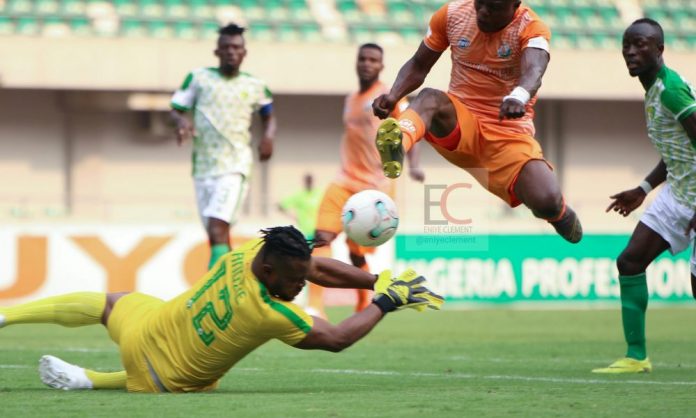 The global coronavirus pandemic has reached into the heart of the Nigeria Professional Football League with no fewer than two clubs recording positive cases among their personnel.

Champions Plateau United and Kwara United are the two teams currently known but sources say there could be more.

According to reports, Ilorin-based Kwara United currently have nine players and four officials with the virus. This was discovered during the mandatory Covid-19 testing ordered by the League Management Company (LMC) for teams in the topflight before resumption of the new 2020/21 NPFL season.

Sources close to Plateau United also revealed that the club has recorded some positive cases but the exact number and the individuals affected could not be confirmed as the club was keeping the matter under wraps.

The news casts a major doubt on the possibility of the NPFL season commencing on the targetted October 20 date or anytime soon. In August, Nigeria’s Presidential Task Force (PTF) on COVID-19 had lifted the ban on non-contact sports. These sports include athletics, lawn tennis, table tennis, golf, cricket, cycling, among others. Contact sports like football, boxing, wrestling, taekwondo, rugby, swimming and basketball remained banned until further notice.

However, in early September, the PTF announced that football activities could resume in the country albeit without fans in stadiums and according to strict COVID-19 guidelines which would be supervised by the ministry of youth and sports development and the National Centre for Disease Control, NCDC.

The position was corroborated by the minister of youth and sports development Sunday Dare. According to a statement signed by the Permanent Secretary of the Ministry, Mr. Gabriel Aduda, Dare said: “We are happy that the ban on sports has been lifted after so many months of inactivity due to the COVID-19 scourge. The ministry is not oblivious of the challenges that would be encountered in organising football matches.

“We cannot take anything for granted. As a way of safeguarding the lives of our players, coaches, officials and fans, approval must be sought and given before any game is played. The ministry would ensure that all protocols and guidelines are obeyed as directed by PTF and NCDC.”

Dare further warned in the statement that the NPFL would not resume until club licensing regulations were met by all clubs.”

“Thedomestic league will not commence until the regulations and controls bothering on financial and licensing control are enforced,” he said.

“The NFF must enforce these regulations and controls as stipulated, otherwise the Nigerian professional and amateur leagues will not be approved to resume.

“These include proper licensing of players, insurance for players and coaches, compliance with FIFA rules on players’ contract and transfer, running the clubs as professional endeavours, among others.”