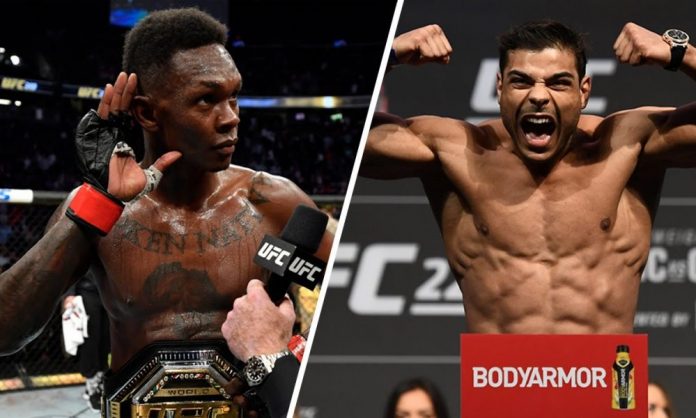 All is set for the much anticipated UFC 253 clash at “Fight Island” in Abu Dhabi, United Arab Emirates between undefeated Nigerian-born middleweight champion and the equally undefeated and fearsome Paulo Costa of Brazil.

The bout will be the first UFC title fight featuring unbeaten fighters since Rashad Evans faced Lyoto Machida for the light heavyweight title at UFC 98.

31-year-old Adesanya (19-0, 8-0 in the UFC) will be making the second defense of the title he captured last year from Robert Whittaker. His first defense was a unanimous decision over Yoel Romero in March.

Costa (13-0, 5-0 UFC) also made his most recent appearance against Romero, winning by unanimous decision in August 2019. That was the only fight the only fight that went the distance. In his other 12 fights, he scored 11 knockouts and 1 submission. Since then he has been sidelined by a bicep injury that required surgery.

The two have a well documented ongoing feud which will be settled once and for all in the octagon in a fight UFC president Dana White has said has a potential to be named Fight of The Year.

“I don’t know what you guys think, but I predict that’s ‘Fight of the Year,’” White told reporters in Las Vegas, Nevada after UFC 252 on Saturday 15 August. “I think stylistically, it’s the perfect fight. If you look at the way Costa fights, he puts pressure on you, he stays in your face the whole time. Adesanya likes to stay on the outside and pick you apart.

“I think that fight is going to be an absolute war. Just stylistically, it matches up really, really well, and both guys are animals. Both guys want this fight really bad, and I think it’s going to be ‘Fight of the Year.’”

On his part, Adesanya is one of 13 fighters in UFC history to win an undisputed title with an undefeated record. Reports from his camp indicate that he is in the shape of his life. He has taken to Twitter over the last week to show how relaxed he was ahead of the big clash and revealed that he is more focused than ever before.

“It’s the best I felt, definitely,” he said. “My body has already been changing these past three weeks. Now we’re just waiting for the call. In hindsight the experience [of the lockdown] has been good for all of us. We were just living the martial arts lifestyle.

“We know what to watch for with him. Other people have let the moment take over. But I’ve been in those moments many times in many fighting codes, so there will be nothing new.”

For Costa, he wants to leave the decision out of the hands of the judges and end the contest in spectacular fashion.

“I’m going out there to finish him,” the 29-year-old said. “I’m coming to show who I am. What I came here to do is to finish this guy and become the face of [the UFC].”

Costa said the 30-foot cage that will be used in Abu Dhabi, as opposed to the 25-foot cage that is used in Las Vegas at Apex, will give Adesanya more room to move and create angles.

But Costa said it’s a misnomer to believe that he’ll just allow Adesanya to stick and move.

“He’s going to try to run away a lot, we know this,” Costa said. “He wants to avoid the collision, but he cannot do that forever. Whether it’s the first round or the second round, I’m going to get him into position where he can’t avoid the fight and that will be the opportunity for me to show who is the best in this game.”