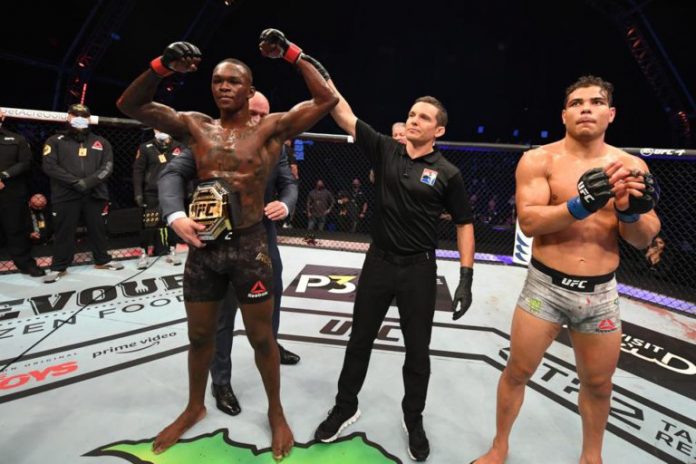 Brazilian professional mixed martial artist, Paulo Costa, has expressed disgust at his Nigerian-NewZealander counterpart, Israel Adesanya, over the latter’s behaviour during their UFC-250 bout on Sunday.

Adesanya had knocked Costa out in the second round of their encounter in Abu Dhabi, the United Arab Emirates (UAE), to maintain his undefeated record. However, the 31-year-old while celebrating his victory mocked Costa by pretending to have sex with him.

This hasn’t gone down well with the Brazillian who has described the celebration as disgusting.

This has forced a reaction from Costa’s camp who say Adesanya will pay for it the next time they face each other.

“I come here to talk about the actions that the human trash did after our fight,” Costa said in an Instagram video.

“Nobody will stop me. Nobody can stop me.”

“[UFC president] Dana White, make this fight happen. I didn’t see what he did in the Octagon until now. It’s a matter of honour now. Dana White, make it happen. I will be 100 percent this time, no excuses, to rip this disrespectful clown’s head off.”

Adesanya improved his MMA record to 20-0 (9-0 in the UFC) after thrashing the previously-undefeated Costa on ‘Fight Island’.

And the 31-year-old is thinking about his next opponent as he eyes No.3 ranked UFC middleweight Jared Cannonier, who faces Robert Whittaker next month at UFC 254.

A win over the former UFC middleweight champion could book his title shot against Adesanya.

Speaking about ‘The Killa Gorilla’, the UFC middleweight king said: “Jared Cannonier, I love his energy, he’s a beautiful man. I said, ‘You destroy Robert Whittaker, you’re next.’