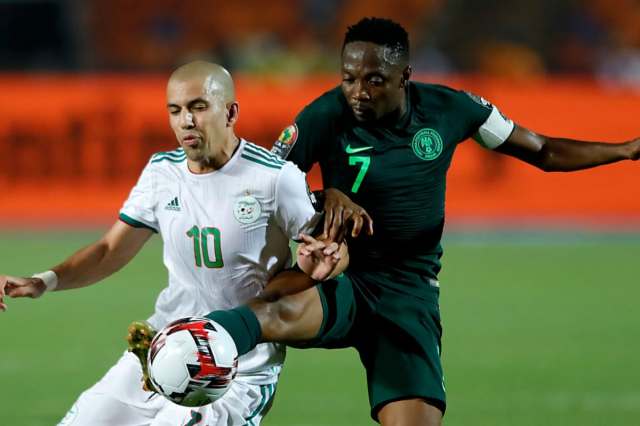 Some Nigerian football fans have expressed disappointment over the National team’s performance against the Desert Foxes of Algeria.

The Super Eagles lost by a lone goal to the Algerians on Friday in Austria.

The match served as a warm-up encounter for both teams as they prepare for the African Nations Cup (AFCON) 2021 qualifiers.

The AFCON has been scheduled to hold in Cameroon next year.

This is Nigeria’s first game since the outbreak of COVID-19 pandemic, coupled with the new arrivals in the team, some fans believe that the team is yet to solidify well.

After the game, fans took to their twitter handles to share their thoughts.
Debola Adebanjo, a sports journalist with the BBC, said the North African side didn’t spare Nigeria.

“Algeria’s organization can’t go unnoticed, better shape of the ball and understood how Nigeria wanted to play through the wings and blocked them every time; ruining Nigeria’s rhythm at every opportunity. Algeria are the team to beat,” she said.

Another fan, Peter Nwosu, said Paul Onuachu, the team’s forward on the field of play, was not good enough.

“Imagine playing a 6ft:7in striker who was struggling to win aerial duels and then we had wingers who were only interested in cutting in and taking aim at the goal, surely that was a mismatch.

“Eagles definitely deserved to lose, maybe even by more goal margins. In Maduka Okoye, though, it does seem like we might have found ourselves a good goalkeeper,” he said.

May Johnson said Coach Gernot Rohr was to blame for the poor performance of the team.

“If we had the chance to ask Super Eagles players individually if the game plan was to break down of the Algerian defense then you would understand where the problem is.

“There was no actual tactical plan to break down the defense. For me, Rohr is to blame,” Johnson added.

“Pass back all the time and not an iota of excitement, they didn’t play like a Nigerian team today. Maybe their way of supporting the #EndSARS campaign,” Iloba added.

Nigeria will also take on Tunisia in the second friendly game on Tuesday at the same venue in Austria.

The match, played at the Wörthersee Stadium in Klagenfurt, saw Borussia Mönchengladbach star Ramy Bensebaini scoring the match’s only goal.

The Algerians piled up pressure on the Nigerians, scoring after just six minutes when full-back Bensebaini followed up a rebound from a header off a corner-kick with the Eagles’ defence in disarray.

Algeria continued to press forward as Nigeria struggled to settle into the match.

The Super Eagles’ first real chance at goal, however, came in the 22nd minute when Alex Iwobi fired a shot at the Algerian goal, but his effort screamed wide off target.

Nigeria finished the stronger of the two teams after debutant Zaidu Sanusi’s cross in the 39th minute located Paul Onuachu leading to a corner-kick.

Nigeria started the brighter of the two sides in the second half but they continued to give away possession and relied on counter-attacks to really get going.

Against the run of play, the impressive Tyronne Ebuehi drove from defence to shoot at goal on the hour, but again his effort failed to hit the mark.

Hoffenheim defender Kevin Akpoguma, who was recently cleared by FIFA to change international allegiance from Germany, made his Eagles debut when he replaced Ebuehi in the 67th minute.

However, it was the North Africans who pressed forward in an attempt to double their lead, while the few times Nigeria surged upfront they could not go past a very organised Algerian defence.

Goalkeeper Maduka Okoye tipped away a goal-bound effort by substitute Yacine Brahimi in the 84th minute.

Substitute Kelechi Iheanacho, who replaced Onuachu, came close to grabbing the much-needed equaliser with a last gasp effort in added time but his shot went off target.

“This is a very good test for us. There are positives to pick from a tough game like this,” Nigerian coach Gernot Rohr was quoted as saying on the team’s official Twitter account

He said: “Now we have to recover well and start to plan for the next game on Tuesday against another tough team, Tunisia.”

The Super Eagles head to the Jacques Lemmans Arena on Tuesday to face the continent’s second-ranked team, Tunisia, who defeated Sudan 3-0 earlier on Friday.