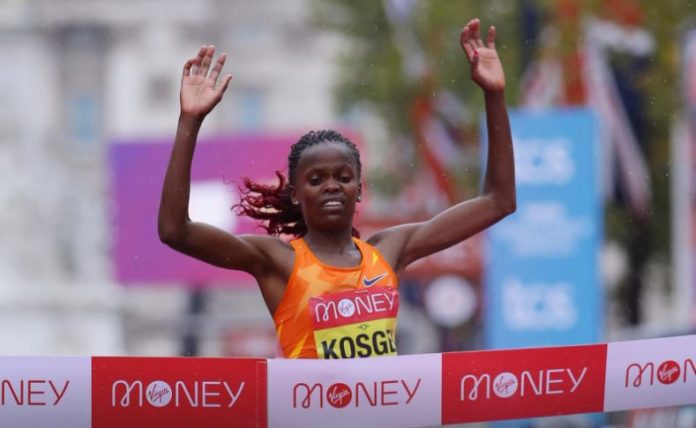 Reigning Olympic marathon champion and marathon record holder Eliud Kipchoge has unveiled the footwear he will use for this Sunday’s London Marathon.

The Kenyan legend will wear the Nike Air Zoom Alphafly Next% for the 2020 elite-only, the same shoes he wore for the Ineos-1:59 Challenge in Vienna last October, when he became the first person to run a marathon in under two hours. However, this version has red and green markings, inspired by the Kenyan flag. The shoes also feature the runner’s initials and 1:59:40 – the time he ran in Vienna.

“The shoes for Sunday’s competition. Inspired by colors of the Kenyan flag, representing (the) great people of this beautiful country and to celebrate one year anniversary of the achievement 1:59:40 in marathon distance by EK,” Kipchoge said.

“I was really involved in the making of the Alphafly Next%. My work was to test the shoe, to test how it feels, to compare the new sole to the old one, to feel how it responds when I’m running and give all my feedback to the technicians.”

When Kipchoge wore the shoe for the Ineos 1:59 Challenge, there were calls for it to be banned from competition following accusations that it had multiple carbon plates. But earlier in the year, Kipchoge brushed off any criticism that the shoes give him any unfair advantage.

“It is my legs that are still doing the running,” he said. “Innovations are part of sport and always have been. With running, the effect of technology will always be minimal especially if you compare it to other sports. Train hard and be disciplined. Be the best you can be and believe in yourself.”

In January, World Athletics announced that from April 30 of this year, any shoe used in competition must have been available for purchase on the retail market for four months, in effect banning the use of prototypes in competition. The new regulations also stated a shoe must not have a stack height of more than 40mm, a restriction the Alphafly complies with.

Speaking in February, Nike said, “We are pleased the Nike Zoom Vaporfly series and Nike Zoom Alphafly NEXT% remain legal. We will continue our dialogue with World Athletics and the industry on standards for performance footwear that meets the needs of elite and everyday athletes.”

The London Marathon edition of Kipchoge’s Alphafly shoes remains largely unchanged – they feature a full-length carbon plate, Zoom X cushioning and the two Nike Zoom Air Pods, which have been added to the forefoot for responsive cushioning and propulsion.

Kipchoge will be taking on, among others, Ethiopian Kenenisa Bekele, a three-time Olympic gold medallist, five-time world champion on the track, and the reigning 10,000m world record holder.