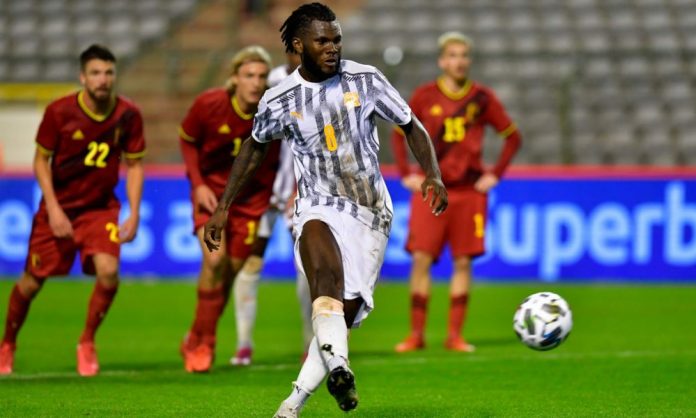 The Elephants of Ivory Coast on Thursday halted Belgium 12 consecutive winning streak at the King Baudouin Stadium in Brussels following a 1-1 draw.

The West African side earned a late equaliser from the penalty spot to bring the Roberto Martínez side run of 12 successive victories to an end.

Belgium are ranked first in the FIFA world rankings.

Michy Batshuayi converted from close range to give Belgium a 53rd-minute lead but Franck Kessie equalised for the visitors from the spot with four minutes remaining.

The Belgians rested almost all their regulars ahead of Sunday’s Nations League clash against England at Wembley but went ahead when Batshuayi converted from point-blank range at the second attempt.

This was after he was set up by Alexis Saelemakers, one of five debutants used by coach Roberto Martinez.

Batshuayi also had the best chances of the first half, being denied by Ivorian goalkeeper, Sylvain Gbohouo, and blasting a free kick from the edge of the penalty area wide.

Substitute goalkeeper, Hendrick Van Crombrugge, rejoined the squad hours before kick-off after the birth of his child this week.

He replaced Simon Mignolet to earn his first cap and made a reflex stop to deny Nicolas Pepe an equaliser after Wilfried Zaha had cleverly set him up.

Zaha continued to trouble the home defence, however, and was fouled by debutant, Sebastiaan Bornauw, in the box, leading to the Ivorians late penalty.

It was a first international in 11 months for the African side who next play Japan in Utrecht on Tuesday.

Belgium’s game against England on Sunday is followed by another Nations League match in Iceland on Wednesday.