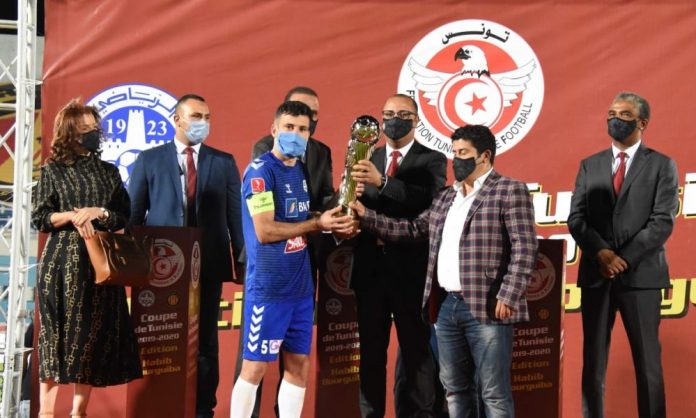 Minnows US Monastir pulled off one of the biggest upsets in African football when they upset giants Esperance 2-0 on Sunday 27 September to win the 2019-20 Tunisian FA Cup title, their first-ever trophy since the club’s creation in 1923.

This year’s edition of the cup, the 88th edition, was named after Habib Bourguiba, the first president of the Tunisian Republic. It also marks the occasion of the 20th anniversary of his death.

The final was played at the Stade Mustapha Ben Jannet in the beautiful coastal city of Monastir.

Having never won any league or cup titles before, US Monastir entered the game as underdogs in comparison to their their more illustrious opponents, four times African champions Esperance.

Monastir took the lead five minutes before halftime. Nigerian international striker and Tunisian Ligue 1 Golden Boot winner Anthony Okpotu put Ali Amri one on one with Esperance goalkeeper Moez Ben Chrifia who managed to save his shot. Ilyes Jelassi followed up the rebound with another effort of his own which defender Abdelkader Bedrane tried to clear it, but ended putting in his own net for an own goal.

After the break, Esperance seemed lethargic and devoid of their usual sharpness as they looked clueless against a feisty and resolute opponent. At the hour mark, Esperance manager Moine Chaabani made three substitutions at once hoping to find the equalizer.

But it was Monastir’s substitute Yassine Amiri who put the game beyond Esperance’s reach after 82 minutes. He controlled a long pass to score past Ben Chrifia and start the celebrations for US Monastir, who finally ended 97 years without a trophy. They will now compete in next season’s CAF Confederation’s Cup, their first ever appearance in CAF continental club competition.

The victory caps what is undoubtedly the best season in the club’s history, as they finished in third place on the league table, their highest ever finish.